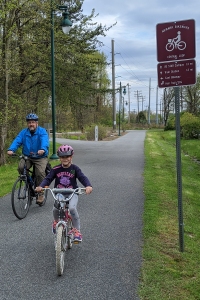 Feeling restless at home? Want to get some outdoor exercise at appropriate social distances? Consider dusting off that bike in your garage and heading out along Newark’s recently signed Central Loop Bikeway*.

Wayfinding signage was introduced along this bikeway last fall as phase 1 of a multi-year project to develop a connected network of paved roads and trails in Newark, which is designed to encourage use of low-traffic, low-stress streets and off-road multiple-use pathways (like the popular James F. Hall Trail) by bicyclists of all ages. 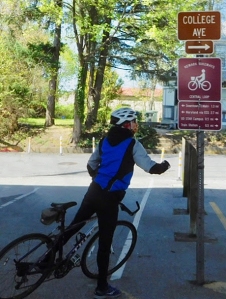 BikeNewark has been and is working with the City of Newark’s Department of Public Works & Water Resources staff as well as its Department of Parks & Recreation to plan a network of eight bikeways. These will enable low-stress connections to in-city destinations and trails outside of Newark (such as those in White Clay Creek State Park). BikeNewark plans for its phase 2 signs to be implemented this year, comprising three new bikeways. See Bikeways plan (PDF). 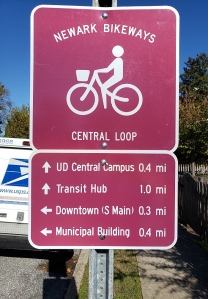 Newark Bikeways will also serve as the way through Newark for the East Coast Greenway (“ECG” on the signs), a designated bicycle corridor from Maine to Florida.

Local or visiting cyclists will be able to use the Newark Bikeways system as a way to travel around Newark for shopping, work, or recreation. Bicycle-specific signs designed by the Delaware Department of Transportation (DelDOT) are placed to guide them along the mix of paved off-road trails and city streets. DelDOT generously contributed the cost of the Central Loop Bikeway signs.

Phase 2 signage is being made possible through proceeds from last September’s Community Fun Ride as well as generous contributions from former Newark Mayor (and BikeNewark member) Polly Sierer and the White Clay Bicycle Club.

The nonprofit BikeNewark is a partnership of interested cyclists and organizations working to improve bicycling in Newark, Delaware, and a founding member of The Newark Partnership.

*Note: The Central Loop includes a portion of Delaware Avenue, which we understand can’t be considered “low stress” at this time and can only legally be ridden by bicycle eastbound. When DelDOT’s next major work project in Newark is complete, Delaware Avenue will feature a two-way protected bikeway, which will make the Central Loop completely low stress in both directions. 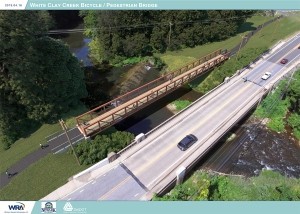 The White Clay Creek/Emerson Bicycle and Pedestrian Bridge Cost Estimate and Funding is on the agenda for the Monday, July 8, Newark City Council meeting. The Emerson Bridge will be located over the White Clay Creek immediately west of the existing Paper Mill Road vehicular bridge (see figure above).

The meeting will be held at the City of Newark Municipal Building, 220 South Main Street and the will begin at 7:00 p.m. Along with Council voting on allocating additional funding for the project, there will also be discussion on potential cost saving measures that was a part of value engineering completed for the project. One of the potential cost saving initiatives includes a reduction in the width of the proposed 194 ft.-long structure from 12 ft. to 10 ft. for a $60,000 savings. Attached is informational material on the project that was included in a public workshop that was held in April.

This will likely be the last time you will be able to comment on the bridge project with City Council. 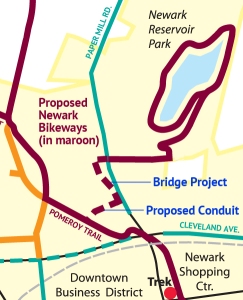 Note: The current plans contain no physical connector to the Pomeroy Trail, which is part of our proposed Newark Bikeways low-stress network; however, we’re told it is included in the city’s 2021 Capital Improvement Project budget. We’d also like your support for voicing the need for associated funding for this paved off-road conduit from the Pomeroy Trail to the bridge approach pathway (see figure), so that low-stress connections can be made to the Newark Reservoir and trails beyond.