No, we’re not referring to the environment here, although bicyclists do contribute to lowering carbon emissions every time they ride. We’re talking visible surface paint. 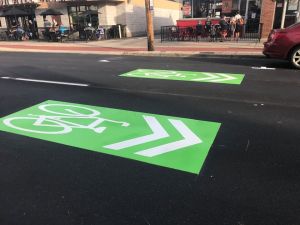 You may be already be familiar with the bicycle markings along Apple Road between South Main Street and West Park Place. Now we’re seeing greenbacked sharrows on East Main Street, and more green surface paint is on the way!

As part of DelDOT’s nearly two-year-long major rehab of East Main Street, greenbacked sharrows have been applied to both lanes along this westbound route through downtown Newark. These are meant to communicate to motorists that they should expect bicyclists in either lane along the mile-long stretch of road. They are also meant to let bicyclists know that they can and should take the middle of either lane (heading west, of course).

Many thanks to the City of Newark and DelDOT (both of which are BikeNewark partners) for including this amenity.

Speed is limited to 25 mph on East Main Street, but very often, due to traffic volume and traffic signals, speeds slow to those much more in line with the speed of a typical bicyclist (anywhere between 10 and 20 mph). Plus, the rehab project included parklets, features new to East Main that will act as traffic-calming (i.e., -slowing) devices.

So, get out and bike on East Main Street. The more that bicyclists use this street, the safer—and more comfortable—it will be for all.

The next major DelDOT rehab project in downtown Newark promises to be somewhat unique in Delaware and will bring with it a lot more green surface paint! Delaware Avenue will be reconfigured to include a two-way separated (and signalized) bikeway from Orchard Road east to the Pomeroy Trail and one-way lanes in either direction from there to Library Avenue. This project will begin as soon as DelDOT’s Elkton Road project is completed.

> More on the Delaware Avenue project 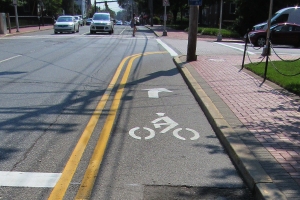 The City of Newark has a new feature on East Main Street for bicyclists—a pocket contraflow bike lane. Unique in Delaware, this trial project was a result of a partnership among BikeNewark, the City of Newark, the University of Delaware (UD), and the Delaware Department of Transportation (DelDOT).

DelDOT completed the work of striping and signing this contraflow lane in July, and, now that UD students are back on campus, the lane will get its first big test. BikeNewark created an educational video and a one-page flyer to help show how this contraflow bike lane can be used safely and legally.

BikeNewark will be evaluating the success of this trial project, which will run through the 2017-18 academic year.