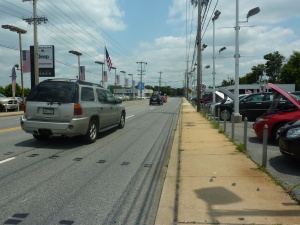 On Wednesday, October 5, the Cleveland Avenue Improvement Task Force concluded its eight-month effort to consider curb-to-curb upgrades of Cleveland Avenue that could be integrated into DelDOT’s upcoming pave-and-rehab project. The committee voted on the following improvements based on the results of modeling work and analyses conducted by DelDOT. These will now be considered by the Newark Traffic Committee and, if approved, will then move on to the Newark City Council for final approval.

> See a more detailed presentation of the proposed changes.

All task force meetings were open to the public and neighboring property owners were invited to participate in the work of the committee. The committee represented a number of stakeholders in the community.

The Newark Bicycle Committee thanks the Task Force voting members for their work: