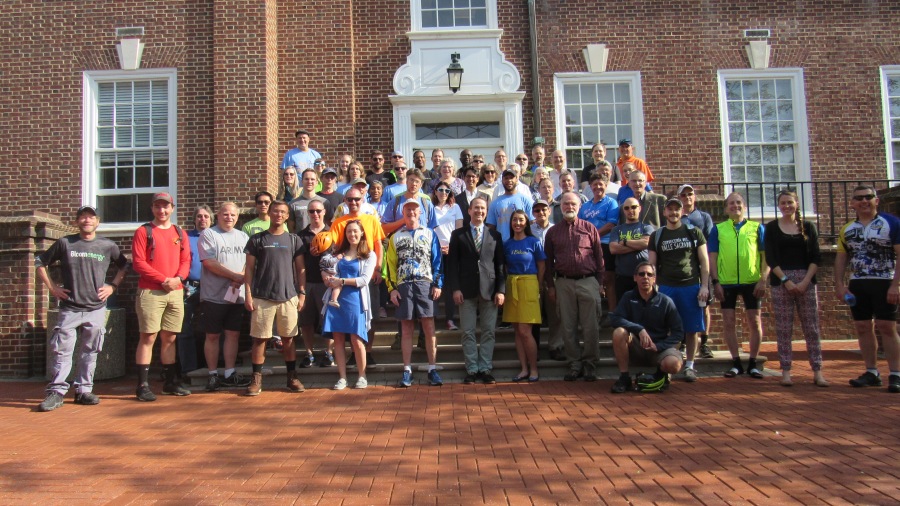 Newark celebrated National Bike to Work Day on Friday, May 17. This beautiful sunny day brought more than 80 riders to Mentors’ Circle on the University of Delaware campus for the early morning event.

Thought ridership was perhaps not what it should have been on such a nice day, the event enjoyed great support in terms of sponsorships, led by Bloom Energy, which allowed us to this year to include a “grand prize” of a new Trek FX-1 bicycle.

Speakers and attendees alike rode in, each in one of six area “bike trains.” Attendees enjoyed light breakfast fare and coffee and garnered free “Bike Month Delaware 2019” T-shirts, courtesy of DelDOT in cooperation with the Delaware Bicycle Council.

Having ridden in early because of his busy schedule, last year’s keynote speaker New Castle County Executive Matt Meyer kicked off the list of speakers at this year’s event.

University of Delaware Vice Provost Matt Kinservik followed up with an official welcome on behalf of the host institution, giving some personal testimony to the positive changes that are occurring in Newark while confessing that he may not have been worthy of his image being used on the event publicity this year.

Kinservik introduced UD mathematics professor and stalwart bike commuter Lou Rossi, who spoke about why he commutes to work, logging in some 13 miles roundtrip every weekday.

Newark-area State Representative Paul Baumbach then spoke to the gathered attendees. He was followed by new Newark City Manager Tom Coleman, who spoke about the current construction challenges facing the city but the many bicycle-infrastructure improvements on the horizon. New Mayor Jerry Clifton, who showed up early and helped set up, talked about his family’s experience bicycling.

On behalf of the City of Newark and BikeNewark, BikeNewark Chair and event emcee, Bob McBride, helped event coordinator Mike Fortner present this year’s Bicycle Friendly Community Leader Award to Susan Grasso. She was chosen because she had spent a good portion of the past three years working behind the scenes, both as a concerned citizen and as a member of BikeNewark, to advocate for bicycling as a normal and viable mode of transportation.

McBride ran down a list of projects and efforts which Grasso either initiated and/or she was directly involved in and concluded, “[Susan] always has been helping encourage people to bicycle more and advocate for better conditions for bicycling. Most recently, she has been serving on a city Sustainability Committee, which completely fits her desire to see more and more bicyclists—i.e., cleaner transportation—on the road here in Newark.”

Though Grasso could not be present to accept the award, her daughter, Caitlin, accepted on her behalf and read words of gratitude that her mom had composed and sent her via cellphone.

Fortner, one of BikeNewark’s liaisons from the City of Newark, joined McBride to make the morning fun by giving away several gift certificates to local businesses. Then, to cap off the event, the Trek bicycle winner’s name—Rayanne Luke—was drawn by Trek Bicycle Newark manager Dave Schindler, and the bicycle was presented to her.

A large group photo was organized to close the event, and afterward lead sponsor Bloom Energy shot its own group photo before everyone headed off to work for the day.

2020’s Bike to Work Day event in Newark will take place on Friday, May 15. BikeNewark looks forward to seeing you there. 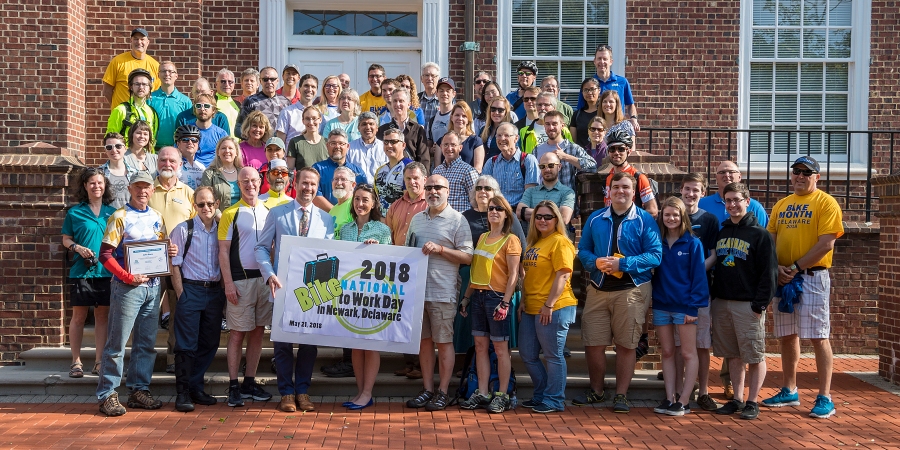 Newark celebrated National Bike to Work Day on Monday, May 21, the event having been rescheduled from May 18 due to rain. The first sunny day in a week saw more than 70 riders converge on Mentors’ Circle on the University of Delaware campus for the early morning event. 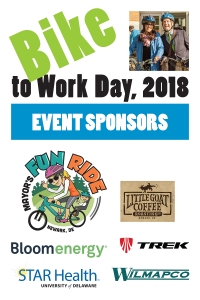 Though ridership was a bit off what we’d experienced over the past couple years, the event enjoyed great support in terms of sponsorships, which allowed us to this year to include a “grand prize” of a new Trek hybrid bicycle.

Speakers and attendees alike rode in, each in one of six area “bike trains.” This year we missed what would have been the largest group, from event sponsor Bloom Energy, as they could not attend due to a plant-wide production meeting. Attendees enjoyed light breakfast fare and coffee, supplied by the Little Goat Coffee Roasting Co., and garnered free “Bike Month Delaware 2018” T-shirts, courtesy of DelDOT in cooperation with the Delaware Bicycle Council.

University of Delaware Vice Provost Matt Kinservik officially welcomed everyone, giving some personal testimony to the positive changes that are occurring in Newark in terms of bicycling and how bicycling has influenced his own commute. He referred to what may be happening within our sphere of influence here in Newark as “Copenhagenization.”

Dressed in her Bike Delaware jacket, Newark Mayor Polly Sierer graced the podium next and listed the number of important infrastructure improvements that will be taking place within the next several years that will enhance the bicycling experience here in Newark, already a bronze-level Bicycle Friendly Community.

The morning’s featured speaker, New Castle County Executive Matt Meyer, spoke about his vision for bicycle connectivity throughout the county and put a local spin on what Kinservik had said, coining a new phrase—“NewCastleCountyization.”

BikeNewark Chair and event emcee, Mark Deshon, mentioned that the League of American Bicyclists had not yet released information about Newark’s most current Bicycle Friendly Community designation. Instead, Deshon pointed to a recent People For Bikes assessment and ranking of the City of Newark. The City is ranked 39th nationwide and 7th among cities with a population under 100,000 in terms of bikeability, according to data the organization gathered.

This year the City of Newark and BikeNewark presented the annual Bicycle Friendly Community Leader Award to Bike Delaware’s John Bare. Bare was chosen because of the groundwork he laid for the Bicycle Friendly Delaware Act, which was signed into law in October 2017 here in Newark.

In the words of Bike Delaware Executive Director James Wilson, “John not only created the initial draft of the legislation in September of 2016 but was also involved at every step with all the many revisions right up until the bill was finally filed in May of 2017, more than seven months later.”

Newark-area state Senator Dave Sokola was the bill’s co-sponsor, and he spoke to the gathered attendees about the facets of the new law and added a few words about the work done by John Bare on the bill. Then Bare came to the mic and shared how this bill had been something that he’d been working toward for many years.

A large group photo was organized, and then event coordinator Mike Fortner, one of BikeNewark’s liaisons from the City of Newark, joined Deshon to make the morning fun by giving away a couple give certificates to local restaurants. Then, to cap off the event, the Trek bicycle winner’s name—Mary Ellen Gray—was drawn by a Trek Bicycle Newark employee and the bicycle was presented to her.

2019’s Bike to Work Day event in Newark will take place on Friday, May 17. BikeNewark looks forward to seeing you there.

Photographs by Kathy Atkinson, courtesy of the University of Delaware