We often feel we don’t get to directly affect decisions that are made in our society. On Monday, March 6, though, there is an important opportunity to do just that with regard to improving conditions for bicycling. 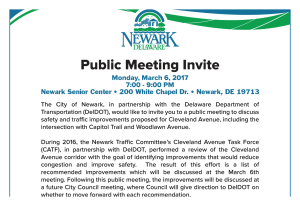 This public meeting will take place on Monday, March 6, at 7 p.m. at the Newark Senior Center, off Marrows Road. This meeting will be the final chance for the bicycling community to vocally support the recommendations made by the Cleveland Avenue Improvements Task Force before City Council deliberates, votes, and forwards its wishes to DelDOT ahead of DelDOT’s pave and rehab work along the length of this busy east-west corridor.

In addition to the task force recommendations, DelDOT’s suggestion of implementing a “Florida-T” configuration at the intersection of Cleveland Ave. and Kirkwood Highway will also be discussed.

BikeNewark is in favor of this use of the Florida-T and each of the recommended improvements along Cleveland Avenue.

In addition to the aforementioned meeting, initial meetings were held recently regarding bicycling in Delaware.

> More info on the Blueprint for a Bicycle-Friendly Delaware