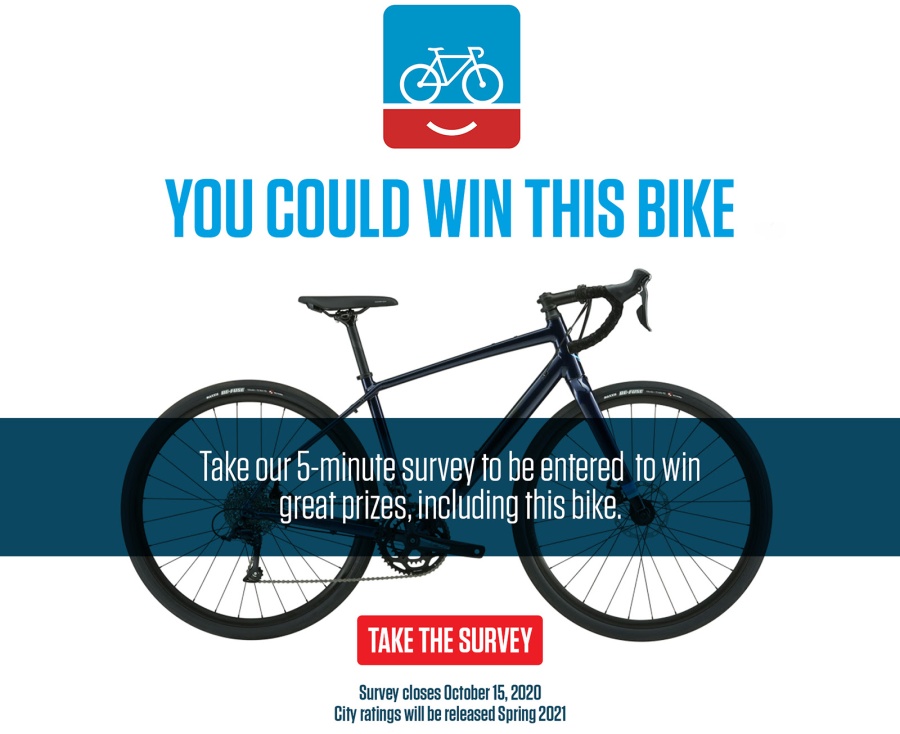 What is bike riding like in your town? We want to know!

Take the PlacesForBikes 2020 Community Survey today and you’ll be entered to win great prizes like this Felt BROAM 60 and others from BikeFlights, Burley, Sena, Terrano Systems, Trek and PeopleForBikes.

Everyone can participate regardless of where, how, if or why they ride.

For those who have already completed the survey – thank you! Your feedback will help determine your city or town’s score in the 2021 PlacesForBikes City Ratings.

We’d love for you to pass the survey link along to your friends and family so we can hear more about perceptions of bike riding in your town.

Together we can make bicycling better!

I grew up in Germany and learned to ride a bicycle at age five. My first bicycle arrived six years later in 1972, which I used to propel myself to school every day. Arriving in 1987 in Newark as a graduate student, I bought a used bicycle to get from a rented room on Cleveland Avenue to a shared office in Robinson Hall. This was perfectly normal for me, but not common at the time.

Ann, a fellow graduate student, was the first American I saw on a bicycle. Racing past my Cleveland Avenue home, she saw me sipping coffee on the porch and stopped to say hello. She looked like an alien decked out with an aerodynamically shaped helmet, fancy clothes worthy of the Tour de France, and a wobbly walk (as her clip-ons were not meant for walking). She asked me why I was laughing at her and if I knew how to bike. Well, yes, I replied, but I do it in jeans, Birkenstocks, and a t-shirt in summer or a coat in winter. Furthermore, I bicycle to get to work or to go shopping or to transport stuff.

My second bicycle culture shock relates to dating. One day I was brave enough to ask out a girl I liked. We quickly agreed on a leisurely Saturday afternoon bicycle tour into Pennsylvania. From her dorm on campus we headed out New London Road heading north. My idea was to spend three to four hours on small roads without a clear destination. We had not even reached White Clay Creek State Park when my date said she was tired, exhausted, and suggested we return. I was crushed and disappointed, as this girl had a very different idea of bicycling than did I.

My third bicycling experience happened in 1989 after I had moved to Madison Drive with a single mom and her two kids. My favorite childcare duty was to drop off four-year-old Daniel at his daycare center on Wyoming Road. So, I mounted a child’s seat to the back of my bicycle, got him a helmet, and off we went every morning at 7 a.m. Every other kid except Daniel was dropped off by car, and he was teased about it a little at first, but not for long….

Some years later this kid got an engineering degree from the U.S. Naval Academy. He worked in the Middle East, Asia, and Africa as a Navy electronics aviator. He currently catapults fighter jets off aircraft carriers and supervises their landing on deck. I doubt that my late-1980s bicycling had anything to do with this, but it is vain and fun to think it may have.