Consistent with recommendations in the 2014 Newark Bicycle Plan, BikeNewark’s Engineering Committee began discussion in summer 2016 about designing a low-stress bicycle network for Newark.

In 2017, BikeNewark continued to refine vision drafts and plan for this low-stress network and related wayfinding amenities.

In 2018, a “Central Loop” was identified as “Phase 1” of this network, and signage was added to this core bikeway in 2019. The pandemic greatly stalled work during 2020.

BikeNewark is continuing to collaborate with DelDOT and City staff to plan for and add wayfinding signage to the five other Bikeway segments in the proposed network.

BikeNewark’s intention is to have signage in place for the West Bikeway during the fall of 2021 to wrap up project “Phase 2.” Wayfinding signage for the remainder of our planned bikeways (“Phase 3”) will follow as funding permits and necessary DelDOT and City projects are completed—view map (PDF).

One of the recommendations in the 2014 Newark Bicycle Plan was to create a two-way protected bikeway (a.k.a. “cycletrack”) along Delaware Avenue. This would enable legal contraflow bicycle traffic flow from east to west in the heart of the city, which is needed as a lower-stress alternative to riding west with the sharrows on Main Street.

This project began to gain traction in June 2014 as BikeNewark (in its former incarnation as the Newark Bicycle Committee) agreed to make the Delaware Avenue cycletrack a top infrastructure priority. The City subsequently hired Johnson, Mirmiran & Thompson (JMT) to do the feasibility study. BikeNewark members and partner liaisons were involved in JMT’s collaborative stakeholder work group.

Detailed engineering design plans are now complete, and construction on Delaware Avenue is scheduled to begin in the spring of 2021. This project will follow the Main Street reconstruction/repaving project, which began in late 2018.

Unlike the photo likeness above, the cycletrack will feature a three-inch-high beveled 18-inch-width curb separator from Orchard Road to the Pomeroy Trail. This was a design enhancement accepted by DelDOT at the suggestion of experts from the Netherlands as a result of presentations and discussions at the 2019 Delaware Walkable/Bikeable Summit.

Other features include raised one-way bike lanes on either side of the road from the Pomeroy Trail to Library Avenue, a raised intersection at South College Avenue, crossing amenities at Amstel Avenue and South Main (not part of the original plan), green surface paint at points of conflict with motorists (e.g., driveways), and bicycle traffic signals.

In May 2017, the City of Newark Traffic Committee heard a proposal for and discussed the trial of a contraflow bicycle lane on East Main Street between North College Avenue and South College Avenue.

After much discussion and some compromising on BikeNewark’s proposal, the Traffic Committee OK’d a contraflow-lane trial from mid-August through the spring 2018 semester.

The concept agreed upon was that bicyclists would remain in the current bike lane southbound on North College Avenue and be allowed to make a left into a designated contraflow lane only during the pedestrian-scramble signal phase (solid red+red arrow) and only while yielding to pedestrians (understanding that while cyclists are moving through the scramble on that signal phase, they are legally considered “pedestrians”).

During that phase, they may also either turn right heading west on West Main Street or move straight across the intersection and then dismount, in accordance with University of Delaware rules and Newark law. Once in the contraflow lane, bicyclists will have to yield to pedestrians crossing South College Avenue in the East Main Street crosswalk before turning right into the South College Avenue bike lane.

During the other two signal phases (solid red and green right arrow), only right turns can be made from the North College Avenue bike lane and only after a full stop on solid red (just like cars).

DelDOT applied paint and installed signage, and BikeNewark produced a short educational video (above) and an info flyer (right) to share with the community. BikeNewark’s aim was that, combined with the educational piece, this infrastructure amenity would have a positive effect on behavior and safety at that intersection while providing bicyclists with a legal means of navigating north to south without having to dismount.

During the ensuing weeks, BikeNewark members observed behavior at a number of times during the day on random days of the week. Data proved conclusively that this contraflow lane was working pretty much as intended. BikeNewark subsequently recommended to the City of Newark that it make this a permanent amenity on Main Street. 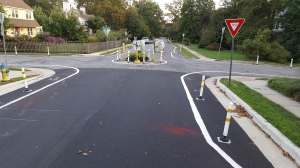 In 2017, the Friends of Newark Neighborhood Streets (FONNS) citizens group and the City of Newark developed a pop-up mini-circle demonstration at the intersection of Orchard Road and Winslow Road in the Old Newark neighborhood. BikeNewark was represented at FONNS project committee meetings to consult on and support the project.

This project came about as a combination of long-standing resident concern over frequent traffic-speed and stop-sign violations (need for traffic calming) and BikeNewark’s longer-term vision that Orchard Road become part of a comprehensive low-stress bicycle network in Newark (fewer four-way stop signs in a quiet neighborhoods). For details on the project, see the mini-circle demonstration page.

Striping for buffered bike lanes and traffic-calming islands has now been applied to Casho Mill Road between Church Road and Pickett Lane. This is the beginning of the completion of a years-long Safe Routes to School project for which John R. Downes Elementary School was awarded a grant.

The intent of the project along this heavily traveled stretch of road on which the school is located is to provide a more comfortable and safer ride for kids and parents to and from the adjoining neighborhoods and keep bicycle traffic riding in the proper direction (with traffic).

In addition, the traffic-calming measures that have been or will be implemented—lane narrowing, center island(s), visible buffer striping—are meant to eventually enable DelDOT to lower the speed limit along this portion of the road to 25 mph, consistent with the portions of the road that bookend the project section.

Project completion is anticipated sometime in 2021.

DelDOT provided a series of public workshops and afterward presented at City Council for community members who aren’t affiliated with Downes. One of the original three options that the SRTS Committee, which included BikeNewark representatives, was presented.

Subsequently, a former City Council member had recommended city funding be allocated for more traffic-calming islands, in addition to the single, planned crossing island, along the length of the project (on Casho Mill Road between Church Road and Pickett Lane).

The repaving of Cleveland Avenue began in the summer of 2018 and will continue, section by section, until complete. Currently, the section between Paper Mill Road and Capitol Trail (Kirkwood Highway) has been transformed from a four-lane road to a two-lane road with middle turn lane and bike lanes and two crossing islands. Prior to this facelift, City Council took DelDOT’s recommendation to make Margaret Street one way northbound and install a traffic signal at Creek View Lane and Paper Mill Road.

As a precursor to future work on the block between North College Avenue and Paper Mill Road, City Council voted to remove on-street parking. Remaining work on the rest of Cleveland Avenue will be scheduled following pave and rehab projects on Main Street and Delaware Avenue. When complete, the entire length of Cleveland Avenue will have bike lanes in both directions (except for lane-sharing conditions at and nearing intersections).

Potential project redesign of the Paper Mill Road/North Chapel Street intersection (see photo above) with Cleveland Avenue was one of the topics of Bike Delaware’s Designing Delaware Intersections for People conference in November 2020.

The project is due to resume after the DelDOT project on Delaware Avenue is completed.

Ahead of this DelDOT pave and rehabilitation project along the length of Cleveland Avenue, BikeNewark (in its former incarnation as the Newark Bicycle Committee) came up with a list of potential improvements to the corridor (New London Rd. to Kirkwood Hwy.) and urged the City to form a task force of stakeholders to help make some preliminary decisions that would benefit all.

On Monday, July 10, 2017, City Council voted 6-1 to ban on-street parking between North College Avenue and North Chapel Street. This was a key ordinance change that was part of the approved set of recommendations and that will facilitate the success of the changes proposed for this corridor. Another piece of the recommendations puzzle was changing Margaret Street to one way north to help simplify the Paper Mill Road intersection. City Council voted in this change unanimously on June 25, 2018.

City Council voted unanimously to approve the entire slate of recommendations at its August 14, 2017, meeting.